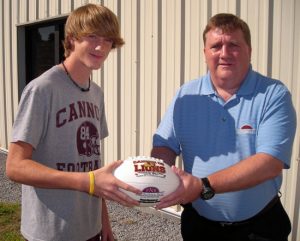 Doug Combs December 19, 2014
The Cannon County Lionettes beat Ooltewah in the first round of the Rhea County Holiday Hoops Tournament 66-44. They will play Wilson Central this afternoon at 3:30 CST/4:30 EST at Rhea Middle School.
Read more

Doug Combs December 17, 2014
The way that the Cannon County Lionettes lost to Smith County last Friday took some of the confidence out of the Woodbury team.  It was evident on the floor Tuesday night as the Lionettes traveled to Alvin C. York Institute.  Even though the Lionettes got the win by 10, 62-52 against the 2-9 Dragonettes, York ... Read more
Read more

Cannon County SAVE Gets Domestic Violence Shelter House For Christmas

Doug Combs December 17, 2014
The Cannon County SAVE Domestic Violence Program has received a gift during the Christmas season.  Director Lisa Baird announced that an anonymous benefactor recently got in touch with her and stated that he was buying a building that would serve as a home for a new domestic violence shelter.  The man stated that that his ... Read more
Read more

Doug Combs December 16, 2014
Santa Claus is schedule to make his final public appearance in Woodbury today before heading back to the North Pole to get ready to tour the world nine days from now.  The Adams Memorial Library will be hosting Mr. and Mrs. Claus for an evening of fun and festivities tonight starting at 5:30.  Refreshments will ... Read more
Read more

Lions And Lionettes Road Trip It To Jamestown Tonight

Doug Combs December 16, 2014
The Cannon County Lionettes will get the opportunity to bounce back after a frustrating loss to Smith County Friday night as they travel to Jamestown to meet the York Institute Lady Dragons.  York started out the season with a 1 but then lost 10 consecutive before Saturday’s 6 point win against Stone Memorial.  The Lionettes ... Read more
Read more